WHAT IS CARBON FIBER?

Carbon Fiber is a polymer and is sometimes known as graphite fiber. Because it is a microcrystalline graphite material obtained by carbonising and graphitising organic fibers such as flake graphite microcrystals stacked in the axial direction of the fibers, it is very strong and at the same time very light. Compared to steel, carbon fiber is not only five times stronger and twice as rigid, but also much lighter than steel. This makes it an ideal material for the manufacture of many parts. These are just a few of the reasons why carbon fiber is favoured by engineers and designers in manufacturing.

Carbon fibers are thinner than a human hair, and when twisted together like yarn, they provide added strength. So they can be woven together to form a fabric, and if a permanent shape is required, a simple process of laying the carbon fibers on a mould again and applying resin or plastic is all that is needed.

Because of its high rigidity, high tensile strength, low weight to strength ratio, high chemical resistance, high temperature resistance and low thermal expansion, carbon fiber is very popular in many industries including aerospace, automotive, military and recreational applications. Most of today's FORMULA one cars are made of carbon fiber. The use of carbon fiber for aerodynamic and structural strength is also a big selling point for top-of-the-line sports cars.

There are two main types of carbon fibers: multi-wall (MWC) and unidirectional (UD). MWC has many layers of graphite that are woven together and heated repeatedly until they turn into carbon fibers. UD has a layer of graphite that runs its entire length while being woven together in different directions so that it forms a single strand with no gaps or holes between the layers.

A Brief History Of Carbon fiber：

The history of carbon fiber can be traced back to 1879, when the Englishman Swan first used carbon filaments to make filaments for electric light bulbs, and later Thomas Edison made practical incandescent carbon filaments by baking cotton or bamboo silver at high temperatures and then carbonising it into full carbon filaments. However, early carbon fiber research was put out of business when the filament was completely converted to tungsten in 1910, thanks to Coolidge's invention of a method for drawing tungsten filaments. By 1958, high-performance carbon fibers were invented outside Cleveland, Ohio. Although these fibers were inefficient, they contained about 20% carbon and had low strength and stiffness properties. 1963 saw the development of a new manufacturing process at a research centre in the UK where the strength potential of carbon fibers was realised. after the 1950s, viscose based carbon fibers were developed in the USA to address problems such as high temperature and corrosion resistance in missile nozzles and warheads. Although it has been developed for quite some time, the technology is still immature in the civilian sector. The high cost of manufacturing truly high-strength carbon fibers has made it extremely difficult to promote them.

An Overview of The Carbon Fiber Manufacturing Process

Carbon fiber is made from a process that is part chemical and part mechanical. It starts by drawing long strands of fibers and then heating them to a very high temperature without allowing contact to oxygen to prevent the fibers from burning. This is when the carbonization takes place, which is when the atoms inside of the fibers vibrate violently, expelling most of the non-carbon atoms. This leaves a fiber composed of long, tightly inter-locked chains of carbon atoms with only a few non-carbon atoms remaining. A typical sequences used to form carbon fibers from polyacrylonitrile involves spinning, stabilizing, carbonizing, treating the surface and sizing.

What can I do with carbon fiber?

Because carbon fiber is a lightweight alternative to many materials, it can replace almost all products such as bicycle frames, aircraft wings, automotive drive shafts, pipes, cargo containers, propeller blades, automotive parts, sports equipment and more.

Carbon fiber is now having a significant effect on automotive manufacturing, as carbon fiber composites can reduce the weight of passenger cars by up to 50%, which will increase fuel efficiency by almost 35% without compromising the performance of the car or the safety of the occupants. This is another milestone in the history of vehicle manufacturing. 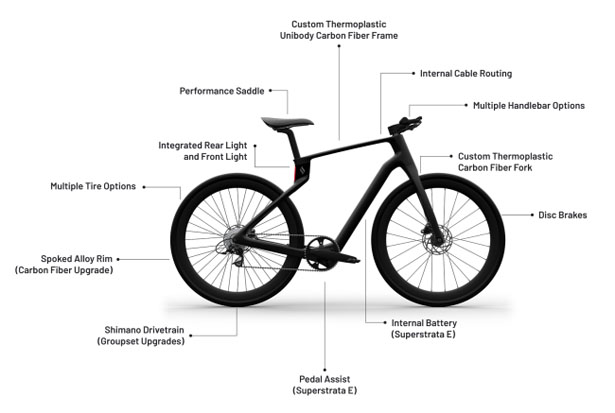 pros and cons of carbon fiber

The pros and cons of carbon fiber can help you decide if this material is right for your project.

Carbon fiber is one of the strongest materials known to science - five times stronger than steel and twice as strong as aluminum. It's also stiffer than both of them, meaning it transmits energy more efficiently than metal and doesn't require as much to resist bending. Plus, carbon fiber doesn't corrode or rust like some metals, which means it can be used where humidity or salt water can damage other types of materials over time. Carbon fiber has a density of about 0.17 g/cm3, which is about half the density of steel (0.283 g/cm3) and only slightly larger than aluminum (0.3 g/cm3). This means that if you make an object out of carbon fiber, it will weigh twice as much as a steel object and nearly three times lighter than an aluminum object!

MDC Mould is a professional carbon fiber mould manufacturer, and has provided mould making and small batch production for many well-known car enterprises such as Lamborghini, McLaren, Mercedes Benz, etc. If you have requirements, please contact us! The products produced are not only sought after in China, but related carbon fiber products have been exported to Europe, America and other countries for a long time.